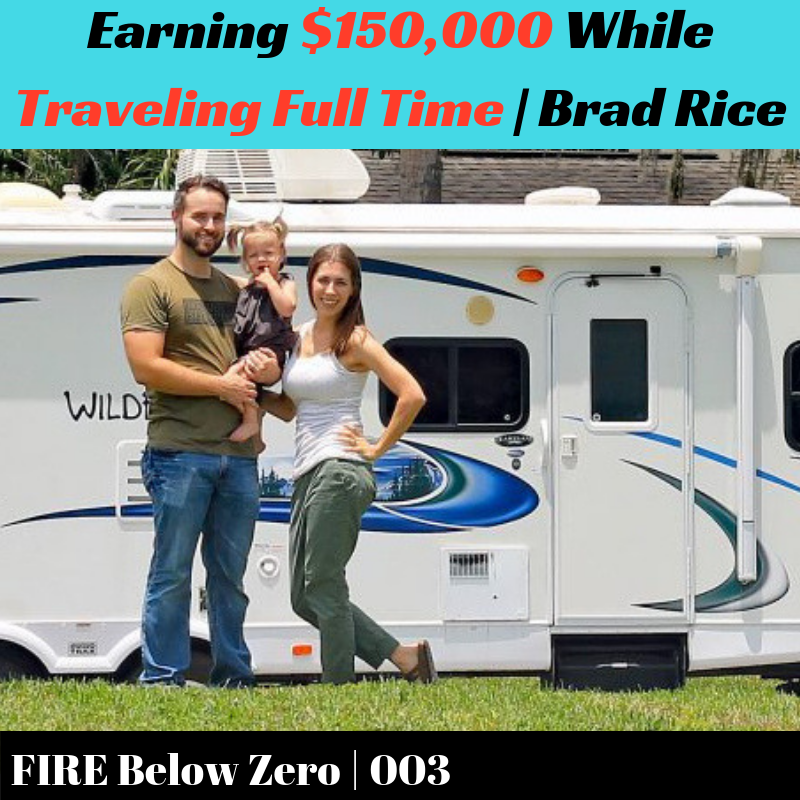 How to Find FIRE

Being naturally frugal, Brad kind of stumbled his way into FIRE. After starting the 9-5, Brad anticipated working like the typical employee and retiring at age 59 ½ with millions of dollars.

Before long on this path, Brad came to the realization that he didn’t find a lot of joy in spending a lot of money. That is when the FIRE was sparked and Brad dove in headfirst into learning more about escaping the hamster wheel.

Getting Your Spouse on Board

Brad and his wife Ashley have always been on the same page with money. They both realized that spending money on frivolous things was not a priority. Rather saving and focusing on happiness outside of material things was their top priority.

Brad’s Tip on Marriage: Make sure you are looking for a spouse that has a similar mindset as you about money.

Otherwise, you will have a lot bigger issues than money down the line!

The Limiting Belief of the Cost of Having Children

There is a popular misconception in the FIRE community, that kids cost too much money, and that they can be a drain on finances. The truth is, it doesn’t have to be that way. Yes, diapers and baby food, and toys cost money, but if you are intentional about finances, having children shouldn’t drastically affect your budget.

Another mistake we make is ripping the things that bring our kids joy, out of their hands BECAUSE it costs money. And that is just no way to live, they are the reason we pursue FIRE, we shouldn’t make their lives miserable to save money.

Traveling with a kid isn’t easy, Brad and his wife are constantly tiptoeing around the RV at certain hours because their daughter is asleep, but it’s all worth it for them.

Actionable Quote: “You just lean into that discomfort and go with it!”

Making the Jump from Banking

Brad started his career in banking as a financial advisor after studying economics in college. He quickly realized 6 months into his career, that this wasn’t the life for him, and he started plotting his way out of this “lucrative career”, literally willing to accept any job that came his way.

Next, he landed a tech job using Salesforce as a junior administrator. He leaned into the career and gave it 100% effort. Within 6 months he was stacking certifications which ultimately led to him making more money.

Designing a Life Worth Living

When Brad found out he and his wife were expecting, he decided to transition to part-time work as a sales force consultant. He could have continued along the trajectory he was already going, but he decided to spend more time with his wife and daughter were much more important.

He messaged local companies via LinkedIn looking for part-time work. One gave him a shot by means of a 2-week contract, and he absolutely knocked it out of the park.

Starting Your Own Company

With all the freed up mind space from going from working 60-80-hour work weeks to only working 20 hours a week, Brad decided to step outside of his comfort zone and start his own business.

Again, as we see consistently in Brad’s story, he jumped in head first, started his company over a weekend and started taking on new clients.

Brad’s Actionable Tip: Google “your state” + “how to start an LLC”

I know it sounds funny, but it is really that simple, yet most people won’t do it!

Brad and his wife are traveling the country in an RV. This isn’t something that has been a lifelong passion for them. They literally heard a friend talking about it one day, and in 6 weeks they had rented out their house bought a truck and RV and hit the road.

Brad and Ashley hardly stay places longer than a week. They are constantly exploring new spots ad locations. Trips are planned not much more than 2-3 weeks in advance. They just dive in and explore!

Quote of the Episode: “Back yourself into a corner and figure out how to make it work”

Brad leaves us an awesome piece of advice if you are burned out on optimizing, take a breather. That is what FI is about in the first place. Be sure to enjoy the journey, instead of burning out trying to hit some arbitrary number.

This is all about the pursuit of happiness, not just hitting FI.

What does this Lifestyle Cost?

This entire trip is only costing Brad and his wife about $40,000 for the entire year. Compared to their normal $45,000/ year lifestyle back home they are actually saving money.

Random things will pop up that are unexpected and cost money, but this journey is all about flexibility.

Brad’s #1 Goal: Dominating parenting! That is the most important thing, regardless of if he has to work till 65.

Fun Fact of the Episode: Brad grew up on a farm, and his family never really subscribe to the idea of Television. He never watched Nickelodeon!

Brad’s favorite cartoon was Pokémon. He still has a Pokémon hunter sticker on the back of his car today!

Thank you so much for another episode of the FIRE Below Zero Podcast. Here are some awesome ways to say in touch, and always have these ideas and strategies at your fingertips